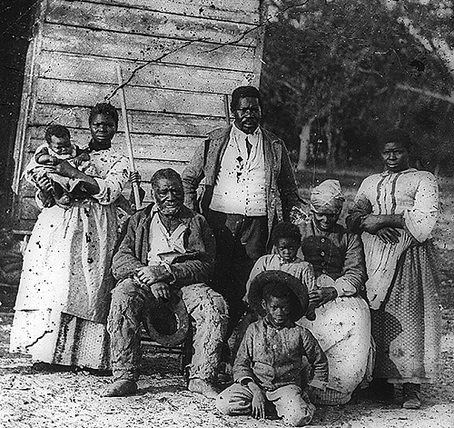 These excerpts were extracted from ten volumes of slave narratives, recorded in nine slave states, that I studied during my research for Chapters 1 and 2 of Almost Hereditary. When possible I have included entries that have variations on the themes to which they relate. Only certain subjects were focused on in selecting the following entries, and different subjects were focused on to different degrees. Subjects with minimal focus, for example, include slave family life and slave resistance (except for running away). See other sources for excerpts on these and other subjects, or for full-length narratives. (For other sources see entries in Almost Hereditary’s annotated bibliography). Slave experiences varied considerably and the following are not necessarily representative of the overall experience. They do give an indication, however, of what the slave experiences were like.

The volume (by state) and page or pages are noted in parentheses after each quote. “GA3,” for example, refers to the third volume of Georgia narratives. The interviews in that volume took place in Georgia but some of the people interviewed had been slaves in other states. All volumes that are referenced are listed in Almost Hereditary’s bibliography. Different publications of the same volumes may have different page numbers.

Most of the interviewers were white people which appears to have prevented some ex-slaves from being as forthcoming as otherwise. Also, in some cases the written dialogue reflected a white person’s interpretation of black speech, which could be influenced by unconscious racism. Furthermore, since the interviews took place almost seventy years after slavery many of the subjects were children when freedom came. This fact could affect their stories. For example, some children (certainly not all) experienced less harsh punishment and sexual exploitation from the master than the adults on their plantations experienced. This, in turn, could lead them to recall that the situation on their plantations was not as bad as it really was.

The slave narratives are in the public domain, however my presentation of these selections, including my notes related to them, are copyrighted.
Slave Narrative - Part 1  (PDF file 139 Kb) 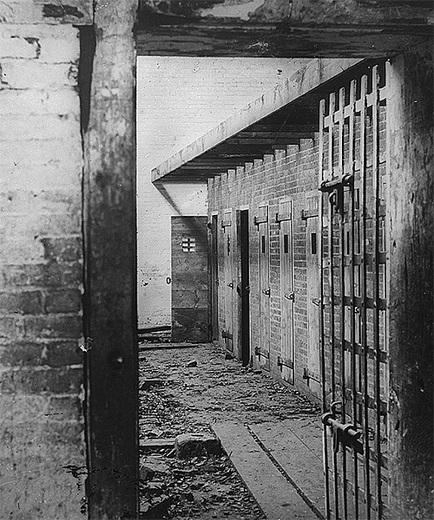 Slave pen, Alexandria, VA, interior view showing the doors of cells where the slaves were held before being sold. Photographed between 1861 and 1865. Library of Congress, LC-USZ62-46763 (P&P).
SLAVE FOOD

In most cases, this appears to have been sufficient. In some situations the slaves ate what the master did, in other situations slaves were considerably underfed. Some masters let their slaves hunt and fish and even have their own gardens. Good nutrition was lacking at times due to an absence of knowledge about that subject. In reading the following entries, keep in mind that some relate to plantations with large numbers of slaves, while others relate to situations with only a few slaves. Examples of the worst situations precede examples of the best situations. (References: Slave narratives I studied; Escott, Slavery Remembered, 38-39 [regarding diet being sufficient]; Kolchin, American Slavery, 113 [regarding nutrition]. George Rawick’s Sundown to Sunup, 55, gives a more negative view of the amount of food slaves were fed, contending that they were fed “poorly.”)

The hundreds of slave narratives I studied indicate that slave housing may have been at least adequate in most cases. In some situations housing was very substandard. Examples of the worst situations precede examples of the best situations. (Reference: Slave narratives I studied. George Rawick’s Sundown to Sunup, 55, gives a more negative view of slave housing. Rawick indicates that it was often poor. Escott, in Slavery Remembered, 38-39, states that slave descriptions indicate that life’s necessities were adequate. He does not assess housing specifically.)

The style of these houses seemed to vary to some extent. Some owners had mansions with high columns, others had large but more modest structures. The owner’s house was usually called “the Big House” or in some cases “the Great House.”

Field workers were managed by a white overseer and/or a trusted black “driver,” either of whom could be cruel to the workers. Most seemed to be hated by the slaves they punished.

The general experience of slaves was that they were considerably overworked. Most of the following entries pertain to field workers. In many cases house slaves, who were sometimes resented by field slaves, were better treated than the others. House slaves cooked, served meals, cleaned, cared for children, spun thread for weaving, and so on. Some slave children were assigned to fan their masters or use a fan to blow flies away from the masters’ food. (References: My reading of the narratives; Escott, Slavery Remembered, 38 [re: slaves overworked])

This was generally done by the owner. In at least some cases slaves had secret names that supported a sense of lineage or community. (References: Escott, Slavery Remembered, 50; Berlin, Faureau, Miller, Remembering Slavery, xl-xli.)

It was common for slave women to be raped by the overseer, their master, or the master’s friends.

One of the biggest complaints ex-slaves had was the whippings. Slave owners who whipped their slaves were the general rule. Almost all owners did this to one degree or another. Just as salve owners who were humane were the exception, so were the ones who devised cruel tortures. (References: Escott,Slavery Remembered, 42-43 [re: one of biggest complaints]; and Rawick, From Sundown, 55; Kolchin, American Slavery, 120-121 [re: most owners whipped slaves, between two extremes])

Alternative punishments included being locked up, the withholding of food, and the threat of selling the slave to what be a harsher master. Threatening to sell a slave to the Deep South from the Upper South was especially disturbing to the slave since masters in the Deep South were perceived as being more cruel than other slave owners.

FORBIDDEN TO LEARN TO READ

In general it was illegal for slaves to be taught to read in the slave states. Plantation owners saw education as a big threat to their ability to keep the slaves “in line.” For slaves to learn to read and write would also challenge the prevailing myth that the black race was inherently ignorant.

OFF THE PLANTATION WITHOUT A PASS; RUNAWAYS; PATROLLERS

Religious tolerance on the part of owners varied. Some forbid any religious expression and punished slaves caught praying. Some slaves were told to not be caught praying for freedom. A couple of the narratives I read noted that the master had a church built on the plantation for the slaves’ use. Some owners let the slaves go to the owners’ white churches, where, in some cases, the preachers told them to obey their masters. On a number of plantations the owners read the Bible to their slaves. Some slaves seem to have had their own approach to religion and worshiped in cabins on their plantations or at meetings off of the plantations.

Slave masters varied in how much they allowed slaves to have a social life, in regards to music, dancing, and visiting. Some allowed or even supported such things, whereas some forbid them. Many owners allowed slaves to celebrate Thanksgiving, Christmas, and the Fourth of July.

SLAVES COULDN’T REFER TO THEIR FATHER AS “FATHER”

I do not know how universally true this was.

Some slaves joined the Confederacy by force while others did so voluntarily. Some fought in the war besides their masters as soldiers and others functioned as servants to their masters. (Some slaves were forced to support the war in other ways. Here is an entry from the Nancy Robinson diaries which shows that a number of them were required to support the Confederacy by handling horses: “Feb. 19, 1865 Mr. Robertson from Charleston [MS] came to press negro men for government service to drive teams [of horses]. I road to Alban to bring the required man for one from each family would be enough.”)

Many slave owners told their slaves lies about the Yankees in order to keep the slaves from cooperating with Yankee raiders or running off to gain freedom from the Yankees.

YANKEE RAIDS (SOME OF THE YANKEES MENTIONED IN THIS SECTION WERE PROBABLY GENERAL SHERMAN’S TROOPS, WHICH BURNED AND LOOTED THEIR WAY THROUGH THE SOUTH)

Some Southern troops were respectful of the civilians they were defending, and plantation owners supported them as best they could when they were in their area. Other Southern troops were less respectful. General Wheeler’s Confederate cavalry was especially notorious for abusing fellow Southerners. They are mentioned with distain in a number of slave narratives.

SOME SLAVE OWNERS KIND DUE TO SELF-INTEREST

Some, if not most, slave owners who were humane did so out of self-interest.

WRONG TO BUY, SELL, OWN SLAVES EVEN IF KIND CONDITIONS

Quite a few former slaves said they were treated pretty well and not whipped or punished very often. Some even said they were only whipped when they deserved it. A small percentage of slaves had very humane conditions (for slavery). At the same time, the narratives contain a number of examples of harsh, even sadistic, treatment. Regardless of how kind some slave owners were, the main point is that it was wrong for people to buy, sell and own other human beings. By its very nature slavery is cruel and inhumane.

WHITE FOLKS WERE THE ONES THAT WERE LAZY

The white Southern stereotype that the black race is lazy is interesting in light of these comments by former slaves.

SOME EX-SLAVES BELIEVED THAT SLAVERY WAS A GOOD THING

A percentage of former slaves preferred slavery to freedom because they had food, clothing and shelter, and, in their opinion, their former masters were not overbearing. Surviving after slavery was extremely difficult for many ex-slaves, in part due to their lack of preparedness for independence, including almost universal illiteracy, and the rampant racism on the part of whites.

The slaves often referred to the end of the war as “the surrender.” A factor in whether or not freed slaves stayed on the plantation after the war was how kind or cruel their previous owners and overseers had been. Another factor was how difficult it would be to survive off the plantation.

SOME OWNERS TRIED TO AVOID TELLING SLAVES ABOUT FREEDOM; SOME EX-SLAVES KEPT IN BONDAGE FOR YEARS AFTER THE WAR

There are quite a few examples of this among the narratives.

After the war the Ku Klux Klan and other violent organizations were formed to deny blacks true freedom and perpetuate white supremacy.